Canon 70D vs. 80D: The Best Camera for Enthusiasts

Today, we’ll be reviewing two of the series’ most well-loved mid-range DSLR cameras: the Canon 70D and Canon 80D.

So which one is the better camera?

We’re here to help you decide and choose the BEST DSLR camera to bring out the photographer in you. In 3, 2, 1! Say Cheese!

All photographers and camera enthusiasts know the real deal: Canon is one of the two undisputed leaders of Digital Single Lens Reflex (DSLR) in the market.

The brand offers a wide variety of top-quality cameras, including models under their Electro-Optical System (EOS) series, introduced in 1987.

EOS has it all! Plus, cool bonus features, depending on the camera of your choice.

The good news is both the Canon 70D and Canon 80 are two of the most popular DSLR cameras in the market thanks to their superior build quality and all-around performance.

For anyone who is looking for a sensible and fully functional DSLR, meet the Canon 70D, a classic addition to the EOS series.

The camera was first released in 2013 as an upgrade from the long outdated 60D.

Canon 70D – The Canon That Can

Canon 70D features many new additions and improvements to its predecessor, starting with its APS-C Live View: Dual Pixel Autofocus.

This APS-C function lets you get away with snapping 108 JPEGS or 16 RAW frames at an astounding 7.0 fps continuous mode ―all of which are high-resolution images.

You can easily check your shots at the Viewfinder or with a single tap at its 3.0 inches touch-screen LCD monitor.

For low-light shooting, the camera comes packed with an ISO range of 100–12800. No more worrying about bad lighting here!

You can easily shoot your shot regardless if it’s dark or not. A pretty neat feature if you ask us!

It’s not a wonder why this camera is considered a game changer among Canon DSLR cameras and the photography enthusiasts community!

Is the Canon EOS 70D Obsolete?

Although the Canon 70D is not the latest DSLR camera in the market, it’s still pretty much solid.

Not only does it have a built-in Wifi―a huge step from the Canon 60D, but it also gives you a time-lapse intervalometer and focus peaking for better image quality.

Its superb performance is easily comparable to professional cameras like Nikon D7100.

Whether you’re deep into videography or just an enthusiast at heart out to enjoy the view, this versatile DSLR is the camera for the job.

The Canon 80D is a simple and straight-forward DSLR that:

And, it is overall fun to shoot and bring with you ANYWHERE you go. For that alone, it’s worth our applause.

Now, at a glance, the 80D does not look any different from the 70D, and that’s only because the 80D is Canon 70D’s successor.

When the 80D was first announced in 2016, Canon had taken the strengths of the 70D and improved it.

And, with a faster image processor, the DIGIC 6, the camera instantly locks in on the subject.

With Canon 80D ‘s touch focus capabilities and 100% optical Viewfinder, you’re sure not to miss a shot. This comes especially handy for wildlife photography and other live moving objects.

Another serious improvement Canon 80D has over 70D comes from a new mirror vibration control system. This cool feature reduces the blur effects of the shutter shock.

Also, did we mention that it’s weather-sealed? Rain or shine, don’t be afraid to take out the Canon 80D!

Is the Canon EOS 80D still worth buying?

The question now is: Is 80D still relevant?

For many budding videographers, the Canon 80D is a great mid-entry camera to add to the gear. Because of its hyper-focus function, it captures images and videos BETTER than the 70D.

Another reason why the 80D is favored by professionals and enthusiasts alike is it uses the same lens mount as many of Canon’s lenses.

If you’ve bought a pair of lenses from Canon before, then this will help you save BIG BUCKS.

The Canon 80D lets you play around and explore different types of lenses at a REASONABLE price point. Who wouldn’t want that?

New doesn’t always mean better. By now, you’re probably thinking that Canon 80D is the better DSLR camera between the two. After all, it’s the newly improved Canon 70D.

Both the cameras have an advantage over each one and have their own notable features. More details into our comprehensive Canon 70D vs. 80D review!

A closer look and more detail on our favorite Canon EOS cameras.

Two important factors to always consider when searching for the ideal camera are size and weight. And luckily, Canon 70D and 80D come in the perfect build.

They’re both pretty similar in terms of dimensions and materials used.

The two EOS cameras have the same polycarbonate and magnesium alloy body that are weather-resistant and the same solid measurements.

The only difference between the two DSLR cameras is the weight, with 70D weighing 25 grams more than 80D. But you can barely tell the difference!

It’s not anything significant. 80D isn’t superior over 70D when it comes to body design and vice versa. They’re designed EQUALLY.

A camera’s sensor size provides photographers with control over the depth of field when used with focal length and aperture.

For photography dummies, bigger camera sensors mean that the images would have better focus and more light.

So, which camera has a better processing speed?

Although Canon 70D has an impressive APS-C Sensor of 22.5 x 15mm and a DISC 5 processor, 80D ‘s DISC 6 and larger sensors are much more advanced.

When this feature is combined with 80D ‘s 22.3 × 14.9 mm APS-C Sensor, the RAW shots come out with very little noise―a picture perfect scene.

When it comes to continuous shooting, the two cameras are equipped at 7.0 frames per second. But, don’t be fooled.

While they have the same burst rates, Canon 80D is bigger, buffer, and more beefed-up than the 70D. 80D ‘s 45 focus points make it a much BETTER high-precision DSLR camera.

It can take around 24 RAW shots before lagging down. Comparing this to 70D ‘s record of 16 RAW, Canon 80D has a considerable advantage.

They’re a great pair of digital SLRs for sports photography (though probably not as good as the 7D Mark II) or any moving objects.

If you’re new to this, you should know that a faster shutter speed captures sharper images of a quick-moving object.

One of the reasons why the two cameras are top picks for video capture is this neat feature.

The APS-C Dual Pixel Autofocus tracks a moving subject with ease. Even more so with the Canon 80D at 45 AF points.

In terms of image quality, the cameras are both stamped with Canon’s high-performance trademark. Canon 80D and 70D have a decent 24.2 and 20.2 megapixels between them, great for taking any shots.

If we go pixel by pixel, the obvious winner would be the Canon 80D with a higher pixel density, dynamic range, and image stabilization.

However, if you ask other camera experts and us, it doesn’t really have much of a significant difference, especially when you see it in real life.

The image quality of 70D is still just as good as 80D, its mid-range DSLR camera contender.

The touch screen is a handy tool that lets you adjust the exposure, the low light settings, and even the angles. It works just like your iPhone, where you can easily tap the screen to set the focus points.

Bonus: Both cameras are great for taking selfies! Thanks to the flip screen, looking great in photos is an easy task.

There are lots of things to love about the two cameras if you enjoy making movies.

One of the core features of both cameras is their high-quality video capture made possible by their superb autofocus points.

But, 80D have somethings that makes it the better DSLR camera for video capture:

Unlike the 70D that requires you to adjust manually, Canon 80D lets you record time-lapses automatically and hassle-free.

And, the camera also comes in perfect for aspiring vloggers or movie directors. 80D ‘s earphone jack is a HUGE plus for not only recording but also monitoring the audio.

For low-light performance, there’s a vast improvement from the ISO range of the two cameras.

As you already know, 80D has a greater ISO than the original 70D, and therefore is much better suited for low light photography.

But, how does this work in real life?

The range indicates your camera’s low light sensitivity. DSLRs with higher ISO allow camera sensors to absorb more light. While this is good for dark surroundings, it creates more noise in the background.

Luckily, the 80D has a special feature known as ISO invariance that cancels out noise while shooting.

The Canon EOS series always delivers, and the Canon 70D and 80D are no exceptions.

The 70D can take 920 shots after every charge, whereas the 80D has an impressive 960 shots with its LPN-E6N battery pack.

Canon 80D comes with a lot of bonus features. Even though Bluetooth isn’t available for the camera model, it has Wi-Fi and NPC connectivity that 70D lacked.

What’s even cooler is you can use a remote to control and shoot by yourself using the Canon 80D.

Since the Canon 70D is an older model, it’s more affordable than the 80D and can be bought at a discounted rate if you search through the second-hand camera market.

It’s time for the moment everyone’s been waiting for… Which one is the better purchase?

Should You Get an Upgrade?

Now, just in case you’re here because you own a 70D yourself and are contemplating getting an upgrade in the form of the 80D, DON’T.

While the Canon 80D has many advantages over 70D, the improvements are NOT that big of a deal.

Yes, even though its Anti-Flicker mode and a higher crop factor from its APS-C sensors are helpful bonuses, it’s all only minor.

If you compare the physical models and the linear resolution of the images the cameras produced, you won’t be able to point out the differences right away (UNLESS you have perfect eyes).

So, our advice? Hold off on upgrading from 70D to 80D and go for gold.

The Canon 70D and 80D are enthusiast cameras with the best value. They come packed with many neat features that far outweigh their mid-range price tag.

Whichever you choose, we’re sure that Canon WON’T let you down. 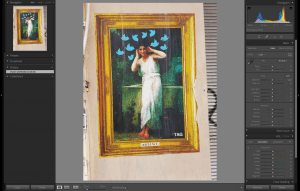